(September 22, 2022 / JNS) A Jewish group has launched a public campaign to push the chancellor of the City University of New York (CUNY) to do more about skyrocketing anti-Semitism on his institution’s campuses.

CUNY, New York City’s public higher education system, controls 25 campuses around the city and has long been criticized by activists who allege that both students and faculty are systemically anti-Semitic.

“In the wake of repeated anti-Semitic incidents and the complete indifference of CUNY leaders, alumni and students will not sit idly by any longer. The Jewish community has been made to feel unheard and unwanted on CUNY campuses,” said Avi D. Gordon, executive director of ACF. “This campaign is just the beginning of our efforts to hold them accountable.”

Gordon urged Matos Rodríguez to “correct course” in order to protect the safety of Jews on CUNY campuses. 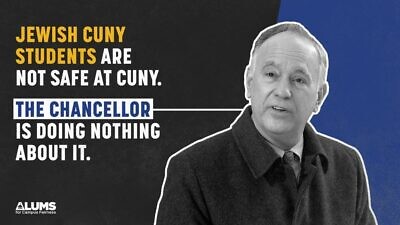 An Alums for Campus Fairness (ACF) advertisement on anti-Semitism within the CUNY system. Credit: ACF.

The campaign includes significant investment in print and digital media advertisements, including in The New York Post, AM New York and other local papers. ACF is also circulating a petition urging the CUNY administration and Matos Rodríguez to take immediate action against anti-Semitism.

ACF said it is reacting to a number of institutional failures at CUNY. Within the past year, CUNY School of Law’s Student Government Association passed a resolution to ban Hillel and other mainstream Jewish institutions, and the law school faculty endorsed the BDS movement. The school also hosted Nerdeen Kiswani, a supporter of Palestinian terrorism who calls for Israel’s destruction, as a commencement speaker.

Matos Rodríguez has been heavily criticized for refusing to take action against systemic anti-Semitism at his institution, including by multiple New York City Council members who admonished him after he failed to attend a Council hearing on anti-Semitism at CUNY. The date of the hearing had been specifically chosen to accommodate Matos Rodríguez’s schedule.

A CUNY spokesperson pushed back on the allegations. “Chancellor Matos Rodríguez has unequivocally denounced anti-Semitism and has taken powerful steps to combat it in all its forms,” CUNY Press Secretary Joseph Tirella wrote to JNS.

Tirella pointed to Matos Rodríguez’s work with Hillel International, expanded training of campus administrators and student leaders to help them understand and recognize anti-Semitism and efforts to share resources to report anti-Semitism on campus.

“To charge that he is doing nothing to combat anti-Semitism is both wrong and absolutely false,” said Tirella.

Matos Rodríguez led a delegation of 12 presidents and deans to Israel in April. New York City Councilwoman Inna Vernikov, who has been highly critical of Matos Rodríguez, said the chancellor told her at a recent meeting that CUNY is now in the process of formalizing agreements to expand the system’s student exchange programs in Israel.

Nonetheless, over the summer a group of CUNY students, faculty, staff and alumni issued a statement pledging to create programs and alliances for Jewish students to “unlearn” Zionism. Additionally, the Kingsborough Community College branch of CUNY, which the U.S. Equal Employment Opportunity Commission found guilty of discrimination against a Jewish professor, assigned a former employee of an anti-Israel organization to further investigate the professor’s claims of anti-Zionist bias by university administrators and union representatives. Kingsborough leadership also placed a BDS proponent on a search committee for its new diversity, equity and inclusion officer. No Jews were appointed to the committee.